With my failed algae containers from my previous post, I needed a more permanent place for my algae culture.  I decided two liter bottle sitting in the recycling would be perfect for this purpose!  While the algae probably would have been fine if I just poured it into the bottle with more water, I wanted a more permanent installation since I had already gone through the trouble of growing the stuff and it might be a while before I think of a new use for it.  As I mentioned previously, the problem with large containers of algae is that the CO2 that the algae feeds off of needs to be dissolved in the water somehow, and the smaller the surface area of the water, the less CO2 there would be.  With that in mind, I ended up buying an aquarium pump, tubing, airstones, and more algae food.

The first step for setting up the reactor was cutting a hole in the soda cap to pass the air tubing through, in addition to two smaller holes to let the stale air escape. 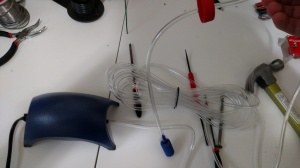 Next was setting up the pump, tubing and attaching the airstone after running the tubing through the cap

And the final setup!  Everything ran fine so the only thing left to do was wait for the algae to replicate enough to take advantage of the space in the new container.

And here’s the setup about a week later.  This algae grows fast!

One thought on “Algae Bioreactor”