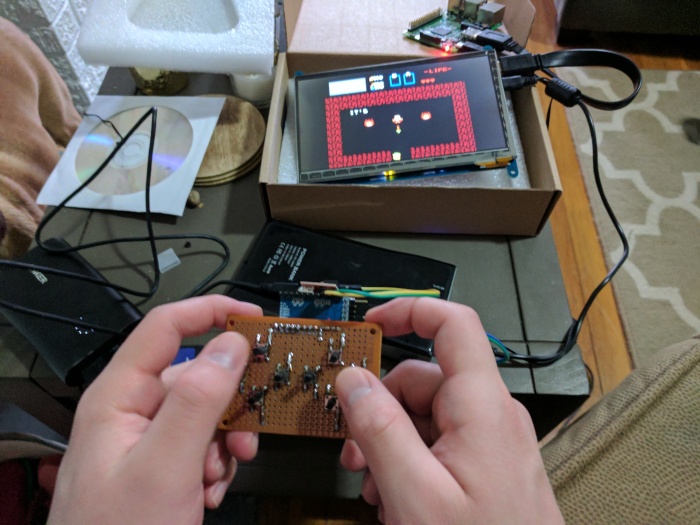 For starters, I had a hellish time getting enough power to both the Raspberry Pi and LCD. For whatever reason the power supply didn’t seem to be able to give enough juice to keep the Raspberry Pi from rebooting. The display has two micro USB ports on it that are used to power the screen and provide touchscreen feedback to the Pi. However since I currently don’t need to use the touchscreen I just powered the screen directly from the battery bank. To circumvent these power issues in the future I’ll need to see if I can get the Pi to provide more current from the USB ports. If that doesn’t work I can use one of the micro USB ports for touchscreen feedback and cut the red power wire to prevent the screen from drawing power from that port and use the second USB port to power the screen directly from the battery bank.

Another issue I noticed with my controller is the lack of menu buttons. The RetroPie interface requires using Start and Select buttons for navigation, so I had to map those to an attached keyboard since I only have four action buttons and four directional buttons on my prototype. Additionally I’ll also want shoulder buttons since the later consoles all have at least two and the PS1 has four.

The next step for the controller interface is designing the PCB!