Now that the vacuum module is mostly assembled, it’s time for the first test! I basically just wanted to make sure that there was enough suction power generated by the fan to pull in dirt and debris. Here’s how the module looks so far: 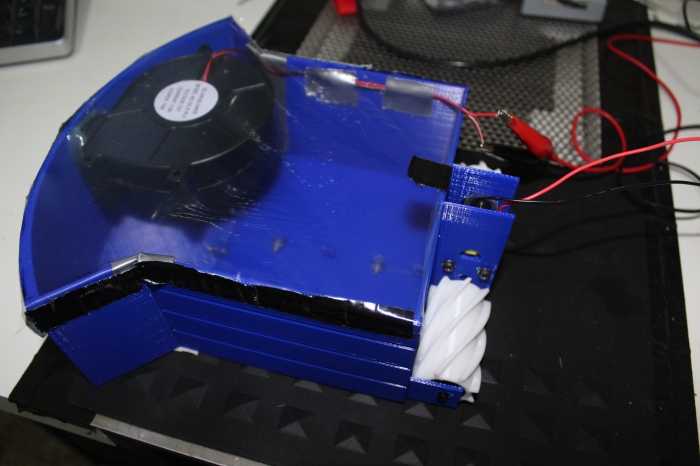 As I mentioned in my previous post, I didn’t design a lid yet for the vacuum module because I wanted to use a clear coating on the top for now.  Having the interior of the dust bin visible will make it easier to test and view what is going on inside.  For now, I’ve sealed the top of the dust bin by taping on a cut up Ziploc bag.

The blower fan is rated for 12V, so I have it wired directly to my 12V bench supply using alligator clips.

The test itself was performed on standard dog hair (since I have so much of it lying around). I had to feed the hair directly into the dust bin input because the vacuum module isn’t yet attached to the main robot chassis and so there’s no direct airflow channel that passes through the roller assembly and into the dust bin.  I’m considering integrating the roller assembly directly into the vacuum’s body so the whole module is self-contained and the complete path of dust through the vacuum can be tested without having to attach it to the main chassis.

So the first test proved moderately successful!  The hair did get slightly stuck, but that can mostly be attributed to the flexible Ziploc bag material being sucked downward, thereby decreasing the height of the opening where the hair entered the dust bin.  For the next revision I’m probably going to curve the input air channel so hair and dust isn’t making so any 90° turns.  Next up, testing the whole thing as part of the main chassis!